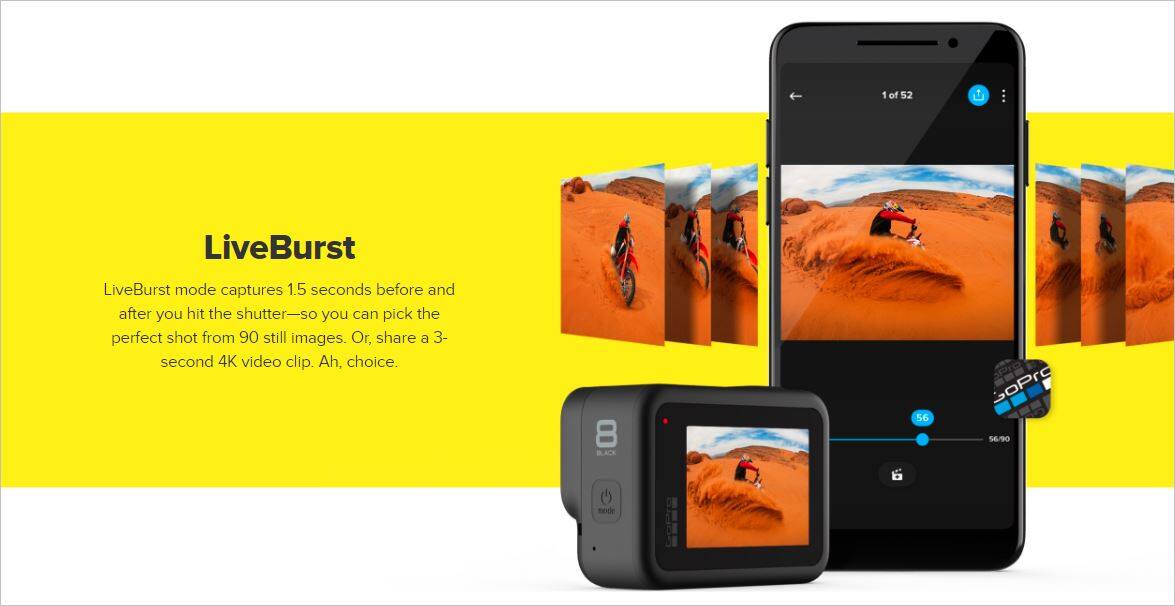 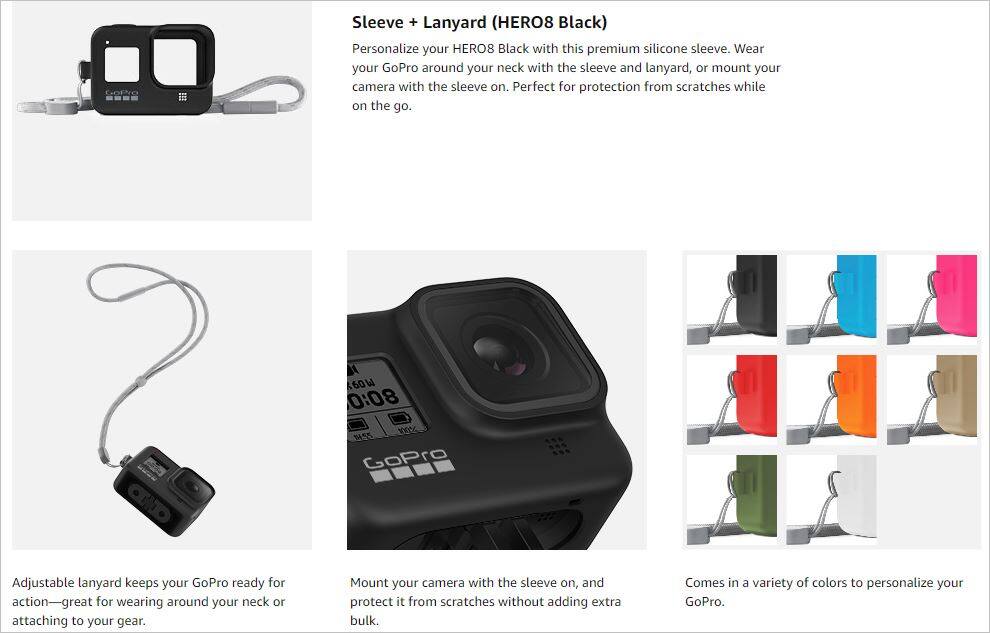 New Features in HERO8 BlackSmaller, more streamlined designUse it as a webcam on your computer using a downloadable app and the latest camera firmwareSwapping mounts and changing batteries has been made even fasterLens is two times more impact resistantImproved HyperSmooth 2.0 stabilization and TimeWarp 2.0 time-lapseNight-lapse and LiveBurst supportSlow motion up to 1080p240 and stability improvementsChange easily between lens FOV with Narrow, Linear, Wide, and SuperView modesMedia Mod option can add more lighting and audio as well as another screenOptional Battery Mod multiplies runtime 2.5xOptional Display Mod and Light Mod add more capabiliesHyperSmooth 2.0 Video StabilizationGet gimbal-like smoothness without the bulk of a gimbal. HERO8 Black predicts your movements and corrects for camera shake to deliver even smoother footage than before.SuperPhoto with HDRGet the best photos automatically. With SuperPhoto, HERO8 Black intelligently applies HDR, local tone mapping, or noise reduction to optimize your shots.TimeWarp 2.0 VideoCapture super-stabilized time-lapse videos while you move about a scene. Increase the speed up to 30x to turn longer activities into shareable moments.LiveBurstRecords 1.5 seconds before and after your still shot so you can choose the best single frame for the perfect photo, or share the brief video recorded.Live StreamingShare your story live over while saving your streamed videos to your SD card.WebcamUse the GoPro HERO8 Black as a webcam on your computer using the latest camera firmware and the free-to-download Webcam Desktop Utility with any of the following apps, and more:Zoom (v 5.0.5 and newer) and Zoom Chrome ExtensionYouTube Live (using Chrome)Webex (using Chrome)Google MeetMicrosoft TeamsSkypeTwitch via OBSBlueJeansGoTo MeetingSnap CameraFacebook RoomsFacetime for Desktop4K60 Video and 12MP PhotosThe camera shoots up to UHD 4K resolution video and 12MP stills.Shoot VerticallyFlip the camera to the side and capture photos and videos in portrait orientation for social media updates.FeaturesControl your HERO8 Black hands-free with over 15 voice commands and accents like "GoPro, take a photo" and "GoPro, start recording"Natively waterproof down to 33' without a housingSlow things down to 8x to relive the moment with slow motionThe intuitive touchscreen features three main capture modes with streamlined settingsFrame your photos and videos in Touch Zoom by simply touching the screen (operates in select video modes)Face, Smile, and Scene Detection functionsAuto-transfer to your smartphone with the GoPro app for quick social media updatesGPS Performance Stickers display your speed, distance, and locationCreate QuikStories with the GoPro and Quick mobile appsAdvanced noise suppression actively filters out wind, vibration, and handling noise for crisper, clearer audio qualityCapture JPEG photos for easier storage, or shoot in raw for the highest qualityGoPro AppsGoPro and Quik apps allow you to access and edit your GoPro footage with simple-to-use yet powerful functions. QuikStories combines the functionality of both apps, automatically downloading GoPro footage from your HERO8 Black and composing an easily shareable montage of your adventures on the spot.

Use your iOS or Android device to live-preview and play back shots, control your GoPro, and share on the fly – Live preview makes it easy to frame the perfect shot – Get full remote control of all camera functions – Share photos and videos

Edit videos with just a few taps – Analyze your photos and video clips to find great moments – Add transitions and effects, and sync everything to the beat of the music – Customize your story with text, filters, music, and more

There are no reviews yet.

or up to 3 interest-free payments of MYR663 with